You must be an adrenaline junky? Well, yes, I do enjoy the adrenaline rush that goes with carving a technical descent perfectly. I also enjoy the astounding view of the mountains in my local area after a lung busting ascent. Or, the silence of the bike when I fly through the air during a big jump.

For me, it all started after damaging both Achilles tendons during separate incidents that were not far apart. I didn’t have a mountain bike then, my preferred activity was hill and mountain running. Those injuries stopped that activity because the flexibility was no longer there and something inside my head said, “stop, this isn’t good for you”. For once, I listened and I am so glad I did.

MTB is just as risky

Perhaps more so than running on the hills. Then again, I read an article about ice hockey goalies earlier and if what they do isn’t dangerous, I don’t know what is. Most sports, even the most pedestrian have an element of risk. Humans are prone to error and our bodies have been known to fail from time to time. 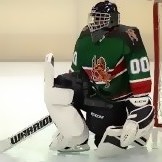 For me, it’s about minimizing risk but, we’ll come to that later.

Just popping back to hill running for a minute. One of my reasons for doing that was because I love nature, the mountains, views, clean air and the sense of achievement that goes with it. It helped me to feel wonderfully connected. Not to mention the high levels of physical fitness I achieved. I discovered the same with mountain biking, just with the addition of some metal, components and two wheels beneath me.

Eager to get back into nature, I bought a bike. Truth be told, the one I picked was mostly because I could afford it. It weighed too much, the gears were unreliable and the brakes squeaked all the time, no matter what I did. If somebody showed me the same bike today, I would call it a “bike shaped object” (BSO) and offer to lend them a bike until they found one more suitable or saved enough to get something more appropriate.

Still, I went out on that BSO, learned what I could and loved my re-discovered freedom until a friend went on holiday and offered to lend me his Cannondale which was a different experience altogether. It was light, responsive and, I could get up steep trails without pulling a muscle. It skipped over rock gardens where my own bike threatened to crush the rocks. I had to have one. Or, at least one like it so, I went out and bought a Specialized Rockhopper which opened up a whole new world of possibility and I was hooked completely on mountain biking very quickly.

Starting at the bottom, the only way was up. I crashed more times than I care to remember in those early days. I grabbed handfuls of brake when a slight touch would have sufficed or, I failed to remember the breaks and didn’t make it around the next corner. One day, I took my eyes off the singletrack I was riding and did an endo into a ditch in a remote place. 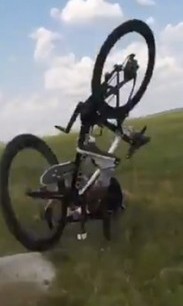 Four inches more water in that ditch and my nose and mouth would’ve been under. It probably looked a little like the Chris Froome, Tour de France crash in the image, right. Except that my feet were stuck in the plastic toe clips and my shoulders were neatly balanced on either said of the narrow, helmet sized ditch. It could have ended badly, I mean ended. The bike was OK though.

Those crashes gave me new purpose and I started learning and found a few ride buddies skulking on solo rides. Together we formed an alliance and had a lot of fun in the process.

Learning sources were a bit limited at the time, The Internet was nowhere near as well resourced as today so there was a lot of trial and error. Still, we learned and quickly progressed to mountainous terrain in Bavaria and the Austrian alps (most of us lived in Germany at the time).

Working together took us to new levels of ride skills and we all learnt how to keep our bikes and ourselves on the trails. Crashes couldn’t be avoided entirely but we had very few serious injuries between us.

We’ve lost touch with a few of the crew but most of us still ride 30-years on. That says a great deal about the value of this sport.

Negatives (Well, not in my opinion)

Check out this great video from Sacred Rides and see what motivates people to ride.

This is Why We Ride - a Celebration of Mountain Biking

Where does the money go?

In the early days, it was bikes, helmets, gloves and replacement parts or upgrades. To a large extent it’s the same today although with added safety equipment such as protective pads, I argue that the cost has increased positively. You can pick up a fair MTB for £300 or go all out and spend a few thousand on the latest mean machine with power assist if you want it.

Thinking of getting started?

Check out the links below. Now is the perfect time with Black Friday just around the corner to pick up some outstanding deals. If you need support or advice, leave a message in the comments below and you will receive a prompt response. Above all, remember . . .

If you decide to purchase from any of the links on this page, please understand that I may receive a small commission. This never affects the price you pay. See more details under the “Affiliate Links” menu item.

6 thoughts on “Why Ride A Mountain Bike?”

Was this helpful? Please spread the word :)

We use cookies to ensure that we give you the best experience on our website. If you continue to use this site we will assume that you are happy with it.Ok