While you’ve been reading around about mountain biking it’s likely that you will have come across some MTB speak. Also, particularly if you’ve been talking to a “Bikeoholic”.

BIKEOHOLIC: A person addicted to mountain biking or other forms of cycling. They have little or no control over how often they think or talk about riding their bike(s) and often, they speak a strange language. 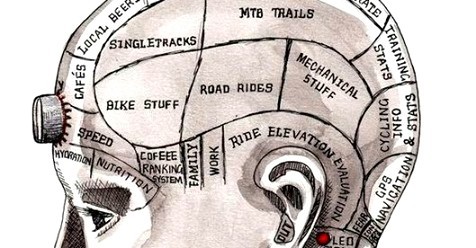 O’Holic: You really are going to need a bike that’s more than a BSO. I mean that one’s probably ok for JRA, but it won’t take too many punches before it breaks on something like that armor down there or one of the baby heads lower down the trail. Just make sure you bail if you must; preferably before you Biff or Endo. Your armor can only do so much. So, don’t Bomb it.

Newbie: Can you give me that again in English? I got lost at BSO.

O’Holic: Bike Shaped Object. That’s a reference to your bike, nothing personal. It’s just that it’s built for Just Riding Around and it might break on that Armor down there.

Newbie: But I can’t see any armor on the trial other than my elbow and knee pads and I’m wearing them.

O’Holic: Look at how that section down there has been built up with old roofing tiles and bricks to prevent erosion. That’s armor too and if you crash on it, it’s going to hurt. Biff, get it? It might also end up with you doing an Endo, aka flying over the bars when you hit those baby heads just after the armor. Look, baby head sized pebbles down there.

O’Holic: It might mate but don’t worry cause once we’ve cleared those, we’re going to follow an old Bandit Trail. Well, it was a bandit trail until the landowner started riding and allowed us free access to her land. Normally I don’t do Bandit Trails, it’s not fair on the owners and it gives us a bad name. The bandit trail is cool, but the tree gates are close together in some places and you need to watch out. Bark tattoos might look neat for a few weeks, but they hurt so best avoided.

In a recent post, that you can see here, I gave some technical definitions to help new riders get to grips with the words coming out of their local bike mechanics mouths. Here are a few more of the most frequently-used words and phrases you might read or hear while out on the trail or at your local bike park.

Note that your own locality may have slightly different words for the same things. If that’s so, send geographic info and the word in the comments section below and I will add it in with full credits and a link back to you.

BERM: A banked corner formed out of natural earth that can be ridden much faster and more smoothly than a flat corner. They take a little extra skill to navigate correctly and efficiently. Berms are a common trail feature and are also found in wooden versions at bike parks. 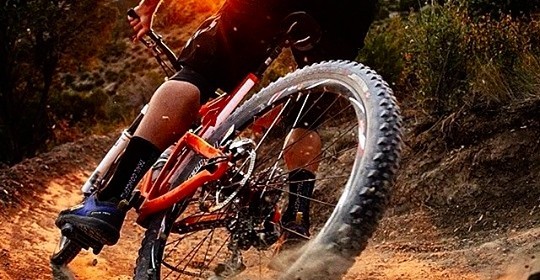 BOOTER: Can refer to either a huge jump or a purpose-built structure designed to jump you up to a higher segment of the trail.

BONK: Running out of energy so suddenly that you can’t go on. Symptoms of bonking include poor balance, worse line choice than usual, and an inability to remember your own first name.

BUNNY HOP: A technique to add to your skills repertoire so that you can clear technical features such as rocks or logs without stopping.

BURP: Burping only happens with a tubeless tire setup, not with tires running tubes. A tire can burp air when the lateral force applied to the wheel distorts the tire and momentarily unseats the tire’s bead, allowing much of the air to leak out all at once. This sudden leakage typically creates a burping sound and can end in a crash because of the sudden, dramatic loss of tire pressure.

CLEAN: To ride through a section of trail without crashing, stopping, or taking your feet off the pedals. 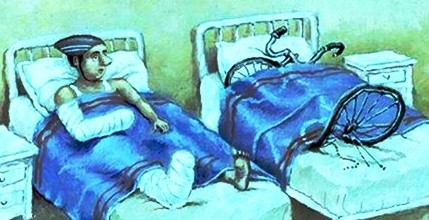 CYCOLOGIST: A bike mechanic or cycling friend who knows everything about repairing or setting up bicycles. A specialist who can help you with your bike.

CYCOLOPATH: A person who enjoys or gains pleasure from cycling-induced pain and suffering.

DiaLED: Refers to when your bike is set up so well that it feels perfect beneath you as you ride. Can also refer to riding a section of trail aggressively and with such perfect flow that your riding buddies comment that your riding is “dialled today”.

DEPRESSION: What you feel when all the trails in your area are closed or not rideable due to severe weather.

DITCH: A ditch. Can also refer to bailing from your bike to avoid significant injury.

DOUBLETRACK: Two trails that run parallel to one another. Typically, these are tractor, 4×4 trails or fire roads. Doubletrack trails allow riders to ride side-by-side so long as they keep eyes open for oncoming MTBers, hikers, etc.

ENDO: A crash where the rider goes over the handlebars. See also OTB

GASSED: Exhausted. Completely physically worn out. Out of gas. Out of energy.

GRUNT: An extremely hard climb that requires the use of a bike’s easiest gear.

HUCK: Riding a large jump or drop, or otherwise sketchy trail feature, without knowing what’s on the other side and without any thought for potential consequences.

JUMP: A technical trail feature in which both wheels of the bike lose contact with the ground at the same time. Jumps can be tiny or huge, or every size in between.

OVER-COOK: To carry too much speed into an obstacle or a turn.

RACING STRIPE: When mud is flung up your back by your rear tire from riding on a muddy section of trail. See also Rooster Tail

RAD: An abbreviation of the word “radical.” If something is rad it is much better than something that is simply cool or awesome.

RAIL: Riding a corner so quickly it’s as if you are “on rails”.

ROCK GARDEN: A section of trail covered with rocks.

ROCK ROLL: A large boulder or rock face that can be smoothly descended without either wheel losing contact with the ground.

ROLLER COASTER: A section of trail that features several short ups and downs, similar to a pump track, where the rider feels like they’re riding a roller coaster. Roller coasters may also be man-made sections of undulating boardwalk.

ROOST: To shred a turn in such a way you kick up a lot of dust and dirt with your back wheel. This is typically accomplished by riding sideways into a berm or banked turn at speed. Some MTBers also refer to the dirt kicked up itself as roost. “You roosted that corner.”

ROOSTER TAIL: When water flies off your back tire while riding a wet surface.

SCRUB: Staying low and fast over a jump. Can also refer to making micro adjustments to your speed. “I should have scrubbed more speed before that turn. I probably wouldn’t have over-cooked it.”

SKETCHY: May refer to a section of trail that was particularly difficult. For instance, when a trail is very dry, corners that are typically not difficult may be harder to navigate than usual, and thus termed “sketchy” by a rider. Sketchy may also refer to a man-made feature that is rickety, old, or otherwise feels or looks unsafe.

YARD SALE / Car Boot Sale: When a rider crashes and all their kit; water bottles, nutrition, backpack, seat bag, etc., goes everywhere. It’s as if you set all your stuff on display for a sale.

ZONE: When the flow is so good, your riding is perfect, you are in The Zone.

Was this helpful? Please spread the word :)

We use cookies to ensure that we give you the best experience on our website. If you continue to use this site we will assume that you are happy with it.Ok